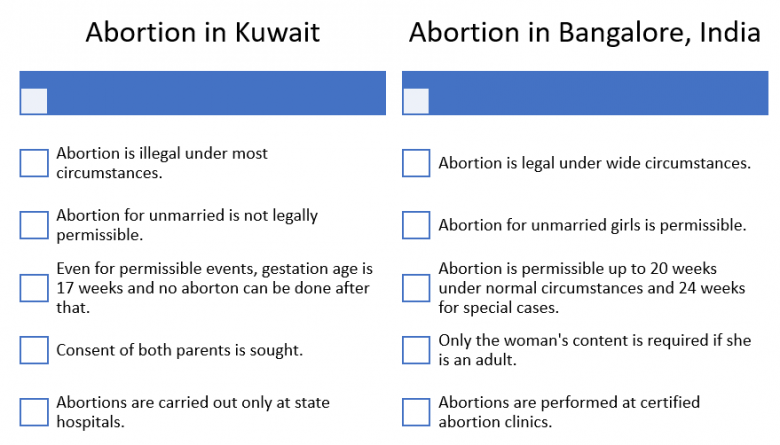 Kuwait, a country in Western Asia, with its capital Kuwait City has been known well in history for being a highly strategic trade port between Mesopotamia and India.

But no one knew that what was once known as the trade route will turn out to be a sigh of relief for women in Kuwait seeking safe abortions. Since women in Kuwait have very limited abortion options, they cannot avail of safe abortions there for major reasons like a contraceptive failure or unmarried girl abortions or abortions for pregnancies that are a result of rape/incest.

Several reasons guide their choice of flying to India.

But can you or should you randomly travel to India for an abortion?

If you are living in Kuwait and are undergoing the physical and mental pressure of not being able to terminate an unwanted pregnancy, then this post is for you to know your best abortion in India option.

The legal status of abortion in Kuwait City, Kuwait:

If you are carrying an unwanted pregnancy in Kuwait and wish to terminate the same, you need to know what are your options for abortion in Kuwait.

In Kuwait, abortion laws are highly strict and abortions are legally permissible only for a limited number of situations. These are:

In the aforementioned cases also, abortion in Kuwait is legal only for married women and the permissible gestation period is only 17 weeks.

Situations that do not permit a legal abortion in Kuwait:

You cannot avail of a legal abortion in Kuwait if:

Abortion in Kuwait that you should never attempt:

Are you living in Kuwait and carrying an unwanted pregnancy?

Are you seeking a way out of it but you find the legal door shut?

What are you planning to do? Are you seeking to purchase abortion pills illegally?

Are you seeking an unsafe method of abortion that is illegal? Do you know what are the health implications of an unsafe abortion?

Do you know the risks and side-effects associated with an unsafe abortion?

Do you know the legal adversities you can face if you get caught of having availed an illegal abortion in Kuwait?

Abortion in Kuwait is punishable:

Do you know if you avail of unsafe abortion for any reason that is not legal in Kuwait, you can be imprisoned for a minimum of three and a maximum of 15 years?

Please do not play with your health and life and never go for an illegal and unsafe abortion. That may be the worst decision.

Are you fed up and are unable to find your best option?

If yes, then you must certainly read ahead. This post is for you and many women like you undergoing similar situations.

The first and the most important thing is to relax and feel free. We do understand how and what you may be feeling right now. And we are concerned for you, your reproductive rights and your health above all, which is why we have come up with this post.

No woman should ever opt for unsafe abortion. It is better to search for the best options and that can be sought only by a relaxed mind. An agitated and confused mind may have you fall into pitfalls, some of which can be very serious. It is better to gather the necessary knowledge and make a wise choice that is best for your health and life.

Abortion in India for women coming from Kuwait:

Now, what if we tell you that you do have an abortion option that may be best for you in terms of health, safety, legality as well as confidentiality?

Yes, you do have choices just like any other woman travelling to India for a safe, legal and confidential abortion.

The legal status of abortion in India:

Compared to Kuwait, abortion in India is legal under broad circumstances. Indian law recognizes the importance of Comprehensive Abortion Care (CAC) and has drafted laws accordingly. Since the majority of women every year face maternal mortalities and morbidities resulting from unsafe abortions, Indian law has taken the issue on a serious note and has always advocated for the reproductive rights of women.

For reasons for which you cannot avail of legal abortion in Kuwait, you can obtain one in India and that too without breaking any law, without putting your health and life at risk and without letting anyone know about the same.

You can avail of abortion in India in events where:

Besides the abortion circumstances, travelling to India also offers several other benefits like:

The best take: The best part of Indian abortion law for a woman who is a citizen or a resident of Kuwait or an expatriate residing there is that her abortion in India will be governed by the same set of rules as for any other woman who is either an Indian citizen or has travelled from a foreign land seeking a safe abortion.

Travelling to Bangalore, India for abortion: A wise choice:

Indian law makes it your best and nearest choice for a safe abortion. But India is a vast country and you need to know your best option even in India.

Coming to the same, Bangalore is a metropolitan city that has been considered as a favourite medical destination for many medical procedures, abortion being one of them.

Here’s an ultimate guide into what you can expect when you seek a safe abortion in Bangalore, India.

The first thing that might come to your mind is how you can travel to Bangalore from Kuwait. So, India is a neighbour to Kuwait and you can easily plan a short abortion trip. Non-stop flights take nearly 5 hours to get you to Bangalore from Kuwait. Some other connecting flights take halts in between but even they are readily available. You can choose from the best options available.

The next thing that makes Bangalore a favourite abortion destination is the availability of world-class health infrastructure. Here, all the recommended methods of abortion are available, the best abortion doctors are available and the hospitals are furnished with all necessary facilities and even state-of-the-art infrastructure to make your stay comfortable.

Though there are several registered abortion clinics in India, the majority of women from within the country and from abroad have recommended travelling to American Hospital Bangalore for its gentle care abortions, which are exclusive to AHB.

To know why most women who have received gentle care abortion services recommend AHB for safe abortions, keep reading further.

In abortion, delays are never preferred since each passing day narrows down the abortion procedure choices and intensifies the number of associated complications and risks. Hence, it is best to have the earliest possible abortion appointment.

Appointment for abortion at AHB: At AHB, your scheduling an appointment is just a call away. And you know what, all abortion procedures at AHB are single-day procedures. You can get discharged the same day and travel back to Kuwait the next day. You can take a rest at a homestay or a hotel or a resort for a night or as you may seem fit for you.

At AHB, all procedures for abortion are available as are recommended by the World Health Organization (WHO). These are decided upon by the doctor to prescribe you the most subtle abortion procedure for your specific case which is both effective as well as efficient so that you can go back to Kuwait with the confidence of having availed a safe and successful abortion.

WHO has recommended three types of safe procedures for abortions according to the gestation length. These are all available at AHB and here is a brief description of all of them. This is to give you a likely idea of what are your abortion options.

What is your gestation length?

If you don’t know your gestation length, just drop the first date of your last menstrual period (LMP) in the comment box and we will let you know your pregnancy period and options you have accordingly. Or you can also write to us or send a private message.

The Medical method of abortion:

The medical method of abortion is an option for terminating early pregnancies, i.e., the ones that are between 6-8 weeks. It is done with the help of abortion pills. But, never opt to self-administer them since they may have serious side effects that you may not know. Pills can be administered orally or may even be inserted vaginally as the doctor seems fit for you.

The abortion pills are a combination of medicines with one pill given at the hospital and the second pill may be given to you to take at home after few hours. Both the medicines together work to carry out an abortion where the embryo comes out just like menstrual flow.

For a woman coming from Kuwait to Bangalore for abortion, it is her option if:

Things you should know if the medical method of abortion is your choice:

Why should you not self-administer abortion pills in Kuwait?

This is is why, at AHB, before prescribing with any abortion methods, location and length of pregnancy is confirmed to avoid complications.

This method is the recommended abortion method for pregnancies that are less than 12 weeks. At AHB, it is a very gentle procedure.

Here is all you may want to know:

This method is the recommended procedure for pregnancies that have progressed beyond 12 weeks, but not more than 20 weeks. At AHB, it is a very gentle and efficient procedure.

Here is all you may want to know:

Why should you not attempt an unsafe surgical method of abortion?

Since the surgical abortion method involves uterine perforation, it needs to be performed only by the registered practitioner who is qualified and trained to perform abortion surgeries and only at a certified abortion clinic.

Otherwise, side effects and/or complications can threaten your health and life. Some of the common ones include:

At AHB, besides doctors, other medical staff, nurses and paramedics are highly qualified and have received international training giving them exposure to both knowledge and experience. Together, they all make a great abortion team.

Since you will receive a private consultation, a private abortion and you will rest in your private room, your privacy is in safe hands. Moreover, AHB does not disclose any information regarding any patient besides herself. So, you can expect all your abortion details to be confidential.

Living in Kuwait, you may also fear social stigma since it is higher in countries where abortion is treated as a criminal act. But, at AHB, all the doctors and other staff members will treat you professionally and compassionately regardless of your abortion decision or judge you for any other personal issues. Here, the patient and her health are the priority and there is no place for judgmental behaviour.

You can happily return to Kuwait after having obtained a successful abortion without any fear for its legality, its safety in terms of health and life and confidentiality.